A Short History of the Hiyoshi Jinja Shinto Shrine

Although the foundation of Hiyoshi Jinja Shrine is unknown, it is said that it was established at the present location in the Tensho-year of Azuchi-Momoyama Period (1573-1591) as Sannosha (Hiyoshi Jinja Shrine was called Sannosha at that time.), when the adjoining Dainichido Temple was rebuilt.

In the Edo era, in 1741, Sannosha was given "Sanno Major Prize". (Sanno means a god who governs mountains.) In commemoration of this honor, the village people began monthly contribution of 1 Mon (about 16 yen at the current monetary value) per person starting 1741 in order to rebuild the shrine building. With the reserve of contribution, the shrine building was rebuilt (the first reconstruction) and to commemorate its completion, a portable shrine (Mikoshi) was newly built and the people made the first festival on September 19th in 1767. This festival is the beginning of the shrine’s annual festival, which is now called Sakaki Matsuri Festival. (Sakaki is species of evergreen sacred to Shinto)

The situation of the first festival is drawn on the "Sanno Festival Drawing" (Tangible Cultural Property of Akishima) in the collection of Fumyoji Temple. The Sakaki Matsuri Festival, which is still performed as faithfully as possible to Sanno Festival Drawings, was designated as Intangible Folk Cultural Asset of Tokyo in 1955.
The portable shrine (Mikoshi) was repaired based on the subsidies of Tokyo Metropolitan and Akishima city in commemoration of the 250th anniversary in 2016.

As to the shrine buildings, on the first day of September in 1851, the second reconstruction work such as Main building, Torii Gate and God Bridge started. 1,723 of carpenters were mobilized, and the total expenses of over 470 Ryo (1 Ryo is said to be Yen 130,000) were spent, and the current shrine buildings were completed on September 9 the following year.
The shrine started large-scale restoration by the Tokyo Metropolitan Government subsidies and donations from the people from 2005 and the restoration was completed in July of 2008.

The main kami(gods) of the shrine are Oyamakuino Mikoto, Kayamadono Mikoto, and Hayamadono Mikoto. Sannosha was renamed to the Hiyoshi Jinja Shrine separating from the management of the Dainichido Temple by the separation order of the Shinto and the Buddhism in the Meiji era (1869). 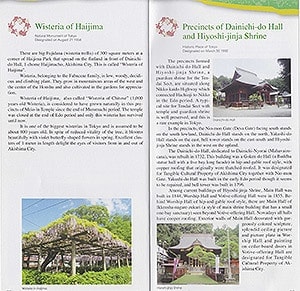 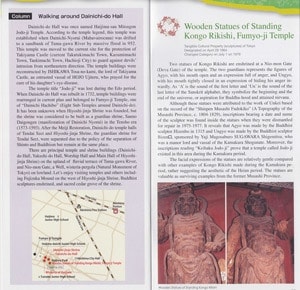